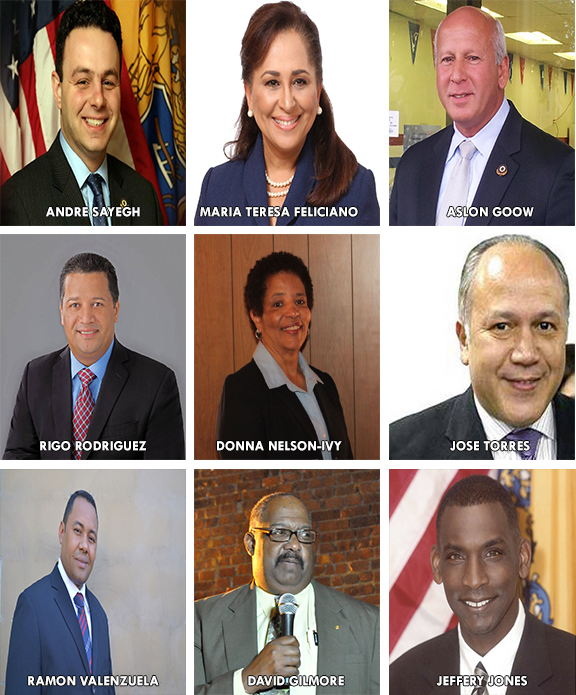 With 12 candidates having picked up petitions over the last three months, nine of them have filed with the city clerk’s office on Monday to be on the ballot on May 13th, according to information obtained from the city.

Minutes before the 4 p.m. deadline Jeffery Jones, incumbent mayor, and David Gilmore, a city activist, turned in their petitions.

Donna Nelson-Ivy, director of the city’s health department, filed in February, along with Rigo Rodriguez, councilman at-large, who has decided to run for the city’s highest office rather than seek re-election.

Aslon Goow, former 2nd Ward councilman and Haledon police officer, turned in his petition in January. Maria Teresa Feliciano, a Hispanic leader with the Dominican American National Roundtable, turned in her papers in December of last year, along with Andre Sayegh, 6th Ward councilman, who is giving a second shot at winning the executive seat.

Although every aforementioned candidate has filed the requisite number of petitions needed to be on the ballot in May, not all of them have been certified. When petitions are submitted, there is a checking process, where each petition is checked for validity. Once a candidate has 801 valid petitions under his belt, she is good to go. Jones, Gilmore, and Valenzuela have yet to be certified.

Three residents, who picked up petitions but for one reason or another decided to pull out of the race, were: Lydia Robles, who quit the race last month after endorsing Torres; Monther Harb, an Arabic newspaper publisher; and Richard Barros, a resident of 17th Avenue.

The last time the city had so many candidates jockeying for the mayor’s seat was some 20-years ago following the death of popular city mayor Frank Graves.