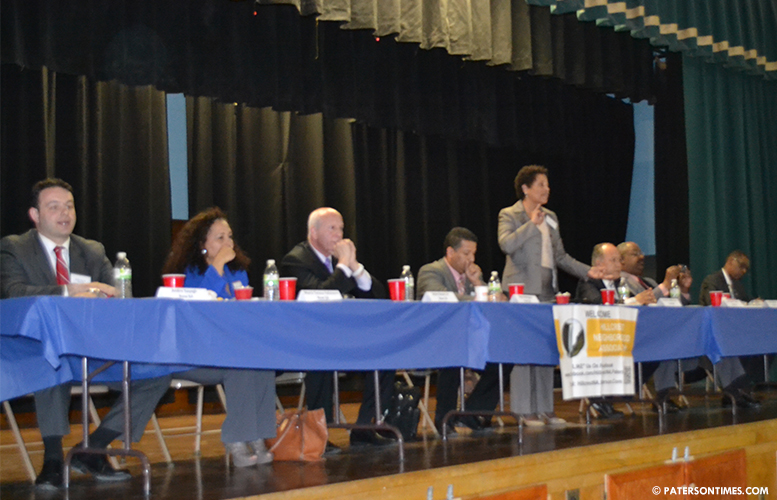 Touting his public safety credentials Sayegh mentioned the Lava Lounge, saying, “We fought really hard with the Lava Lounge. We went back and forth because they were protected, by whomever we’ll find out one day I’m sure; but ultimately when we went in, they were not just smoking tobacco, they were doing all types of drugs in this Lava Lounge, and it was compromising the quality of life for the people in that area.”

A member of the audience yelled, “Liar!” Sayegh, the city council president, continued.

“Glad to say, the Lava Lounge no longer exists. Why? Because I worked with different departments and parties, primarily the police department.”

The hookah spot was a neighborhood nuisance on Montclair Avenue disturbing peace in the quite residential neighborhood in the 6th Ward.

Nelson-Ivy waited for her turn to speak as she was seated three candidates down from Sayegh, placing her in the center of the table with all eight candidates in attendance.

Describing the shuttered hookah place as “dangerous hookah,” Nelson-Ivy said she was concerned for the well-being of the teenagers who were coming into the establishment.
Delivering the final word on who was behind the shutdown of the notorious hookah joint, Nelson-Ivy said, “No, that was the work of the taskforce, the different departments that hit that thing. And then went to court and stayed on it. We went to the prosecutor’s, we did all of that.”

In his remark over the hookah spot being “protected” by someone, Sayegh was alluding to the manner in which the lounge’s owner managed to secure permits for the establishment by bypassing the city’s board of adjustment.

Jose “Joey” Torres, who was mayor at the time of the permits’ issuance, said he did not know the owner of the lounge. “I don’t know who they are. I don’t know who he was making a reference to protecting them,” said Torres. “Planning board and board of adjustment are autonomous boards. It’s against the law for the executive branch of government to actually even interact with them.”