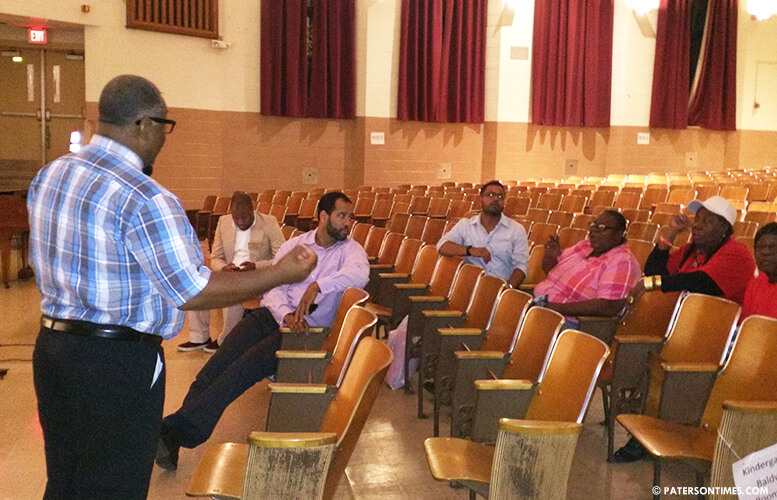 Four of the five individuals seeking to represent the city’s 1st Ward gathered inside the School 28 auditorium on Monday evening in a forum that has been described as “disorganized” and devoid of substance.

James Staton, 1st Ward councilman, the organizer of the community forum, received criticism for not inviting all the candidates to the forum. Three of the candidates Manny Martinez, Michael Jackson, Bernard Jones said they did not receive any sort of notifications to attend the forum.

Jackson raised the issue with Staton. The councilman told the three candidates that he had passed out flyers and announced it during a televised meeting of the city council. The candidates appeared to have accepted Staton’s answer.

The two-hour long forum allowed each of the four attending candidates — Martinez, Jackson, Jones, and Alveria Spencer — to share a brief version of their biography with about two dozen residents.

Many boasted about their Paterson roots. Martinez said his family has lived in the city for more than 60 years. He described himself as an educator and a businessman. Martinez runs his family’s funeral home on Market Street.

Jackson highlighted his return to the city after college and professional football to start Jacksonville Restaurant. He said the Great Recession left his business in bad shape, but he rebounded and continued to operate.

Jackson said he opened a second restaurant further investing in the city. “I invested in my community,” said Jackson. He said he will bring business skills to the council.

Spencer touted her rise from the Alexander Hamilton Public Housing Project also known as the Alabama Projects.  She mentioned years of volunteer work she has been doing in the city from working with the Paterson Education Fund, the Greater Paterson OIC, and the 1st Ward Community Development Corporation.

“I’ve been reading books to kids for the last five years,” said Spencer.

“It’s not a race thing,” said Heidi Brown, a Northside resident. “Don’t play the race card.” Brown and others in the audience were free to shout out questions to the candidates. Brown said the city has had mayors of all shades rendering the race issue moot.

Some of the candidates briefly discussed the city’s crime problem which is concentrated heavily in the 1st and 4th Wards. Martinez said he’d like to see more police officers on walking patrol or “boots on the ground.”

“Our folks are dying,” said Spencer. “You got folks scared to come down here.”

Martinez noted three areas in the 1st Ward that have very different issues. He said the issues on Mill Street are different from those on North Main Street which are further different from issues on Union Avenue.

“The concerns they have are the same,” rebutted Jackson. He said the policies that the council enacts impacts all residents irrespective of neighborhoods. Jackson also took a swipe at Martinez for attempting to jump from the school board to the council. He described a “pattern” of ineffectiveness among people who jumped from the board of education to the council.

Martinez did not return fire. He said he will be “responsive” to the 1st Ward residents. When an audience member suggested he may be too close to the current administration, Martinez said he has good working relationships with city officials.

“That doesn’t mean I’m a rubber stamp for anyone,” said Martinez. Insiders have said mayor Jose “Joey” Torres will likely back Martinez.

Major Roberson, a 1st Ward resident, asked for one thing Spencer would do to reduce crime. She said police substations in the neighborhoods to deter criminal activity. She said there were substations on North 7th Street.

“The block is shut down and the niggas is not even out there,” said Spencer. About two audience members cringing at her casual usage of the n-word exited the auditorium. Before she began her remarks she said her goal was to “keep it real.”

As the forum neared finish at least one audience member expressed dissatisfaction at the way the community forum was conducted. “I’m from the 1st Ward and I didn’t see anything,” said the resident who did not share her name. “Everybody was in here bickering.”

Jones considered leaving the forum early after calling it “disorganized.”

Jackson further pressed Staton on his connection with Spencer. He asked if Staton was using his city council post to collect votes for Spencer because he did not invite the other candidates.

“Everyone knows you openly support Alveria,” said Jackson. Staton said the forums were scheduled before the school year ended.

Veronica Ovalles, who was absent from the forum, said she was attending back to school night at the Community Charter School of Paterson.

“I don’t understand why a councilman who is supporting one of the candidate of the five would host a forum on a back to school night,” said Ovalles. She said she had to skip the forum to visit her two children’s teachers.