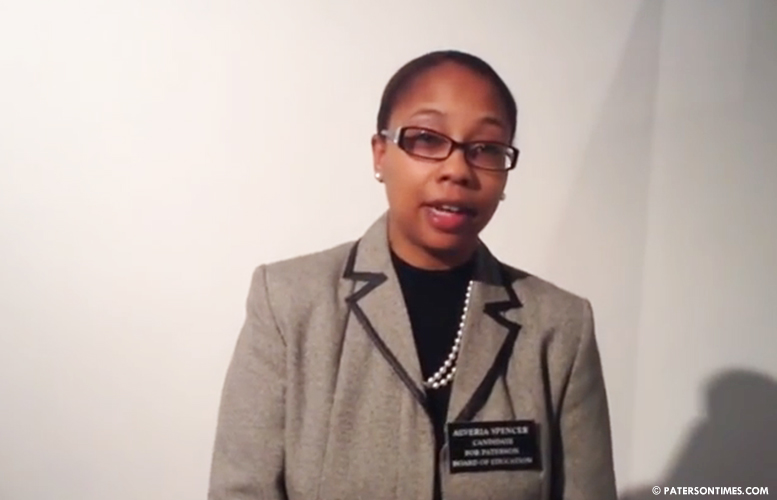 After widespread condemnation from the city’s African-American community and her fellow candidates for using the n-word at a community forum, 1st Ward candidate Alveria Spencer announced Saturday afternoon she is pulling out of the November special election.

“I withdraw my candidacy from the November 2015 election cycle and I will spend these next few months and thereafter working to teach my community to reject any form of the N word being used in any format,” wrote Spencer in a piece published in the Paterson Times.

Spencer, who was denounced for using the n-word while referring to troublemakers who hang about the streets, but hide or avoid a specific blocks upon sight of a police substation, said her withdrawal will give the 1st Ward residents an opportunity to move ahead with the special election without controversy.

In her withdrawal announcement, Spencer regretted having used the word at a public forum. She also apologized to the attendees of the forum, some of whom left the School 28 auditorium on Monday evening after she used the word.

Kenneth Clayton, president of the city’s chapter of National Association for the Advancement of Colored People (NAACP), earlier in the week called Spencer’s use of the word “appalling.” He demanded she apologize.

Spencer issued an apology on Friday afternoon. She ruefully reiterated her apology and sought forgiveness from the African-American community again on Saturday.

“I deeply and sincerely apologize to all,” wrote Spencer. “This comment was offensive to the Black community and people of color in general.” Even before her public apology on Friday afternoon, Spencer privately called some of those she offended with her remark to personally apologize.

“I’m grateful she apologized,” said Waheeda Muhammed, former school board member and a leader of the city’s African-American community, who removed herself from the forum after the word was used. “Everybody makes a mistake one time or another. I appreciate the fact that she recognized it.”

Spencer was running to fill the seat of former disgraced councilman Anthony Davis who was sentenced to a two-year prison sentence in April for taking $10,000 in bribe money ostensibly to help city children.

The others who remain in the race are Michael Jackson, Manny Martinez, Veronica Ovalles, and Bernard Jones.

Jones was the first to make a posting on the social networking website Facebook minutes after Spencer made the remark that drew in school board member Corey Teague into the controversy.

“Did I just hear a candidate use the N word,” wrote Jones which received shock and surprise from a number of commentators.

“Let me guess…VO,” commented Teague speculating the word was used by Ovalles.

“I’m very upset,” said Ovalles on Wednesday evening. “What would make him say such a thing about me?” She provided a screen capture of Teague’s comment.

Teague said he coded the message by using her initials rather than her entire name. He acknowledged that few people managed to figure out who he was referring to using the two-letter initial.

Jones though quickly replied to Teague saying it was not Ovalles.

Ovalles was attending back to school night at the Community Charter School of Paterson on Monday evening and did not attend the community forum which was attended by the other four candidates.

Ovalles said she has had nothing but positive interactions with Teague from their work at Aslon Goow’s mayoral campaign last year. “I’ve been a very nice person to him,” said Ovalles.

The race had three African-American and two Latino candidates. Teague said he knew it wasn’t Martinez because he has witnessed the school board member work with individuals from all races and nationalities without prejudice.

“I didn’t mean any ill-will towards her,” said Teague.