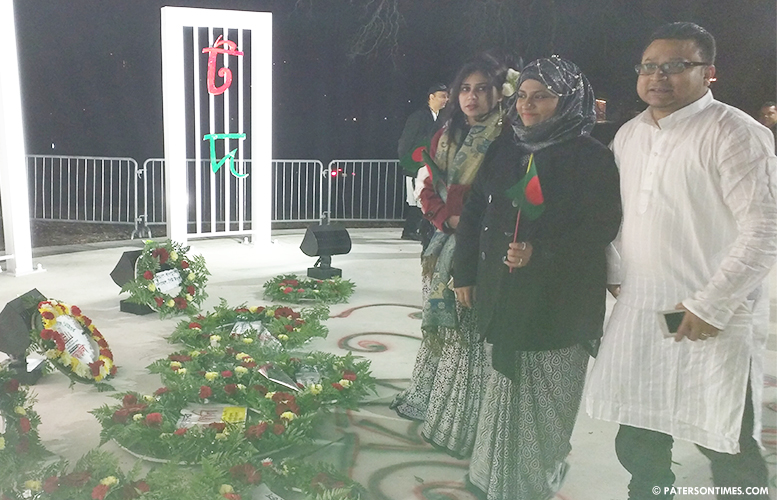 At the stroke of midnight about 200 people celebrated International Mother Language Day at the Shohid Minar monument in Westside Park with a wreath laying ceremony commemorating those killed during the Bengali Language Movement.

“We’re remembering what these heroes did for us,” said Mohammed Hussain, who grew up in the Silk City and now lives in Franklin Lakes. “Because of them we’re able to speak what we speak.”

Hussain and others marked February 21st, 1952, when a group of students and other activists demonstrated in Dhaka seeking equal recognition for their mother tongue, Bangla, while the Pakistani government attempted to impose Urdu on the eastern wing of the country which later became Bangladesh, according to Banglapedia, the national encyclopedia of Bangladesh.

Police fired on the student protesters killing a number of them. “There was a lot of people who sacrificed their lives for our language,” added Fazzlul Razzak, who also grew up in Paterson and now resides in Totowa.

Razzak and Hussain stood at the walk up entrance to the newly built Shohid Minar as successive groups laid wreaths at the monument. We’re fortunate to have this, said Hussain, of the monument built using $150,000 Passaic County Open Space grant and unveiled last year.

The midnight wreath laying ceremony organized by World Glam Entertainment was a culmination of a series of cultural events that took place inside the John F. Kennedy High School auditorium.

Organizers said children and adults put on historical reenactments of the events that lead up to the language movement that succeeded in making Bangla one of the two official languages of Pakistan.

There was also poetry reading, singing, and storytelling, according to organizers. “They are learning about their culture and why the fight happened,” said Mohammed Mahmud, a city resident.

Many have expressed worries at past events that the Bangladeshi-American youths are losing fluency in their mother tongue.

“Not really,” said Hussain. He and others said the monument will serve as a reminder to the young people. Bangla is the eighth most commonly spoken language in the world with an estimated 210 million speakers.

The number of Bangladeshi-Americans in Paterson have been rapidly growing over the years. There is no accurate count of the total number living in the city or in this region; however, many estimate as much as 15,000 to 20,000 Bangladeshis live in the Silk City and surrounding communities.

Bangladeshi-Americans successfully elected their first councilman Mohammed Akhtaruzzaman, who famously won the same seat twice, in 2012. Akhtaruzzaman was not present at the ceremony. He said he was at the hospital with his mother.

Akhtaruzzaman’s wife and daughters took part in the ceremony, according to organizers.

15-year-old Nayeful Islam, who attends the nearby high school, said, “It helps us remember our culture and country.”

Islam, a 10th grader, was there with his friend, who did not speak English. Islam switched from English to translate for his friend in Bangla.