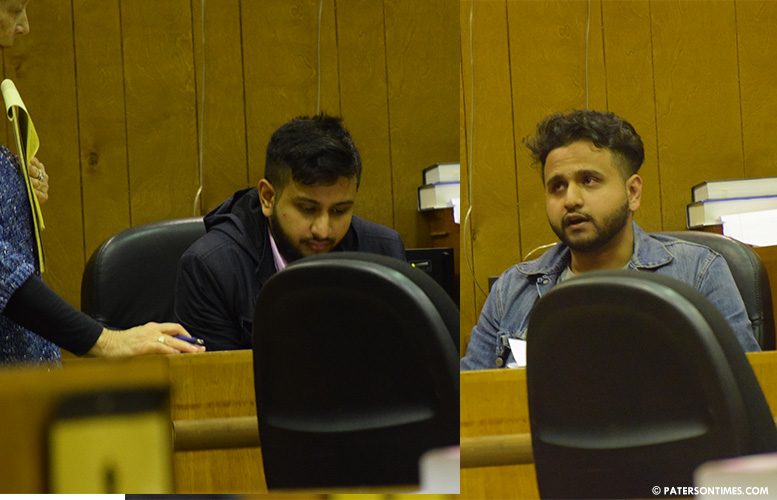 The brothers – Rakibur Ali and Rajibur Ali – called 136 Walnut Street home until the very end of April 2016, both testified. The brothers then lived at 122 Rossiter Avenue at their uncle Abu Sufian’s home before settling at 145 Jasper Street in June 2016, they said.

Neither lived at 136 Walnut Street on Election Day, but both cast mail-in ballots from that address. Their mail-in ballots were received by Passaic County on May 7th, 2016, according to government records.

Though both brothers testified to having resided at 136 Walnut Street until the end of April their neighbor testified in September of last year and said the family did not reside at the location. Kazi Uddin, who purchased the property on April 28th, 2016, testified on September 14th, 2016.

Uddin was living at the home prior to buying it, he testified. Both brothers recognized Uddin. Rajibur Ali (pictured, right) said Uddin lived at the same duplex.

Rakibur Ali (pictured, left), a 21-year-old unmarried Rutgers University student with a 10-month-old daughter, said he was not active in any campaigns. When asked about his assistor on the mail-in ballot, he told Mohammed Akhtaruzzaman’s attorney Susan Champion, he grew up with Foyes Ali.

Shahin Khalique’s attorney John Carbone pointed out to the court both 136 Walnut Street and 122 Rossiter Avenue are in the 2nd Ward. Judge Ernest Caposela in a previous case involving an election in Paterson’s 5th Ward ruled a candidate’s petition that had an inconsistent address as valid because the voter lived within the ward.

Rakibur Ali’s 2015 income tax and his driver’s license also had the same Walnut Street address, according to Carbone. He indicated he never changed his address with the New Jersey Motor Vehicle Commission after moving from Walnut Street. He told the court he completed his mail-in ballot, sealed it, and handed it to his father. His father presumably mailed the mail-in ballot, he testified.

“Is it safe to say you were getting mail after you moved out?” asked Champion.

“I guess,” responded Rakibur Ali. His brother Rajibur Ali provided consistent testimony about the move from Walnut to Rossiter.

“I just went there to sleep,” said Rajibur Ali, who works at Bed Bath & Beyond while his brother works at Shoprite and has a side gig as an Uber driver. When asked how many children his uncle has, Rajibur Ali responded: “I don’t know.”

Carbone presented to the court Rajibur Ali’s driver’s license which had the Walnut Street home as the address. His pay stub for pay period ending May 15th, 2016 also had the same Walnut Street address.

“No,” responded Rajibur Ali shaking his head in the negative. He also indicated he did not change his address at work.