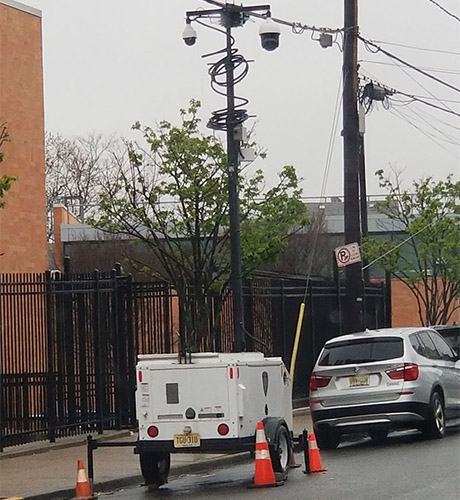 Councilman Luis Velez managed to secure a mobile camera unit for the intersection in the 5th Ward where a 25-year-old city man was shot this week. The unit is at intersection of Market and Pennington Streets, said Velez on Wednesday morning.

“Quality of life is my priority. Camera is up and running,” said Velez while thanking the police for deploying the camera. “My words turn into action.”

Velez had been in talks with law enforcement to deploy a camera to the area following the “drive-by” shooting at the intersection on Monday night. He said the day after the shooting, he hopes the mobile unit will deter trouble makers in the area.

The troubled New Ranchi City bar is to blame for much of the trouble in the area, according to municipal officials. Groups gather at the bar and spill onto the street. The bar was suspended for 180 days last year for having a cockfighting ring and drugs.

Velez said he was at the scene soon after Monday’s shooting. His rival on the council Alex Mendez, who is running for mayor, was also at the scene.

Mendez did live broadcast video from the scene. In that video, Mendez attempts to coax a woman to say she sees him on the street every day. She politely agrees to go along, but adds, “I see Luis all the time too.”

Velez said Mendez did little besides promoting his mayoral run by filming in the area moments after the shooting had taken place. Mendez says in the video his headquarter is close to the intersection.

“He never put nothing in,” said Velez, who represents the 5th Ward, of Mendez, referring to camera request, on Tuesday.