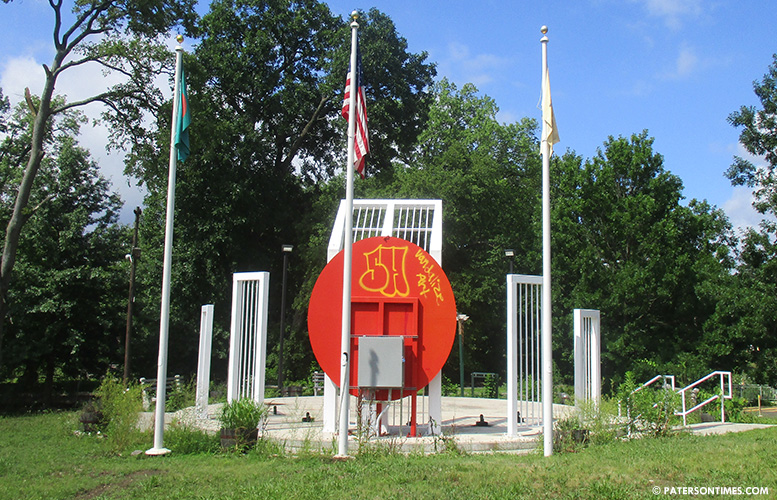 The bright red disc of one of Paterson’s newest and most significant public testaments is now marred with graffiti. The Shohid Minar monument in Westside Park, which commemorates those who died fighting to preserve the Bengali language, spoken by as many as 300 million people throughout the world, has been spray painted with two large, yellow letters, and the text “vandalize Art.”

“What happened is not good. This shows no respect,” said Abdul Hai, in between serving customers over the counter at the Bengal Pharmacy on the corner of Union and Wayne avenues.

Hai pointed out the significance of the monument to the city’s growing Bangladeshi-American community.

“This monument represents people who gave their lives for their mother language. Students protesting were shot to death by members of the Pakistani government,” said Hai. He is referring to an incident in 1952. Pakistan and Bangladesh at the time were known as West Pakistan and East Pakistan.

“It’s unfortunate so see something like this happen. I hope this wasn’t an act of hate toward immigrants,” said Allison McKenzie, a graduate of William Paterson University, who lives in the Hillcrest section. “I love Paterson. I’ve lived here for two years. I love the diversity. Paterson is one big melting pot.”

Passaic County is home to more than 15,000 Bangladeshi-Americans.

The monument serves as the venue for the celebration of International Mother Language Day every February 21. Earlier in the year, two local groups, one led by councilman Shahin Khalique and another by Mohammed Ahmed, whose group played a key role in building the Shohid Minar, battled over who would use the monument to hold a flower laying ceremony.

“Somebody wrote on it,” said Ahmed, who is head of the World Glam Entertainment, which worked with the New Jersey Community Development Corporation (NJCDC) to secure $150,000 in Passaic County open space funds to construct the monument.

Ahmed on Friday said he plans to file a police report and speak to members of his organization to figure out what to do to address the vandalism.

“It’s valuable to us,” said Ahmed referring to the monument.

Khalique had a different response.

“I have no comment for the Paterson Times,” said Khalique on Friday.

Khalique and his family have been the subject of critical coverage in the Paterson Times over the years. For example, an investigative report highlighted the role of Khalique’s brother, Shelim Khalique, in an alleged real estate scam that targeted mostly Bangladeshi families with underwater mortgages.

A lawyer, who was involved in the alleged scam, was later arrested by the FBI.

A second report uncovered Khalique’s deceased father had cast a ballot in the hotly contested 2nd Ward election in 2016, according to Passaic County election records.

Khalique came into office through an election marred by widespread voter fraud. His main rival in the race unsuccessfully challenged the election outcome in court.

The monument in Westside Park is a replica of the one located in Dhaka, Bangladesh. The edifice was established to commemorate those killed during demonstrations held in 1952. On February 21 and 22 of that year, students from Dhaka University were mercilessly gunned down by members of the Pakistani military. The protestors were demanding official status for their native tongue.