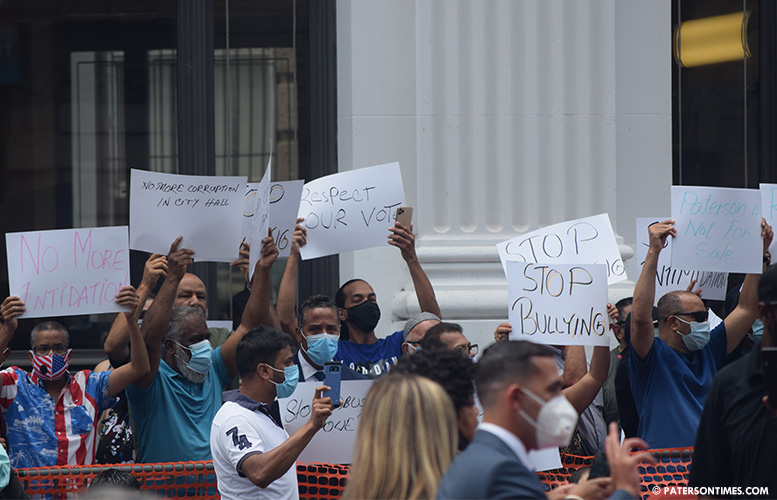 Nearly a hundred people stood behind councilman-elect Alex Mendez across the street from City Hall on Wednesday afternoon protesting a court ruling that stopped their candidate from assuming the 3rd Ward seat.

“It’s not fair. It’s not fair what they’re doing. They are using their power to take me out of office and denying people from being represented,” said Mendez, who is accused of committing voter fraud and election fraud, as he watched councilman Michael Jackson, who is accused of nearly the same offenses, get sworn in. “Where is the due process? Where is the innocent until proven guilty? This is political.”

Jackson’s main rival, Nakima Redmon, never filed anything in court to stop him from taking office.

Mendez was stopped from taking office by an injunction secured by his main opponent longtime councilman William McKoy. He tried unsuccessfully to reverse judge’s decision hours before the swearing-in ceremony for the winners of the May 12 election.

At times, the Mendez supporters chanted his name, drowning out speakers at the swearing-in ceremony.

They booed mayor Andre Sayegh as he delivered remarks at the ceremony.

“Looks like I have a fan club,” said Sayegh. “I guess somebody doesn’t want me to speak.”

Some of Mendez’s supporters have blamed the mayor for his legal woes. Sayegh has also called for Mendez and Jackson to resign after both men were charged with voter fraud.

Governor Phil Murphy, who is allied to Sayegh, has also called on both men to step aside.

McKoy has filed a lawsuit seeking to invalidate the results of the 3rd Ward election. A judge has yet to hear the case.

In the meantime, the 3rd Ward seat will remain vacant.