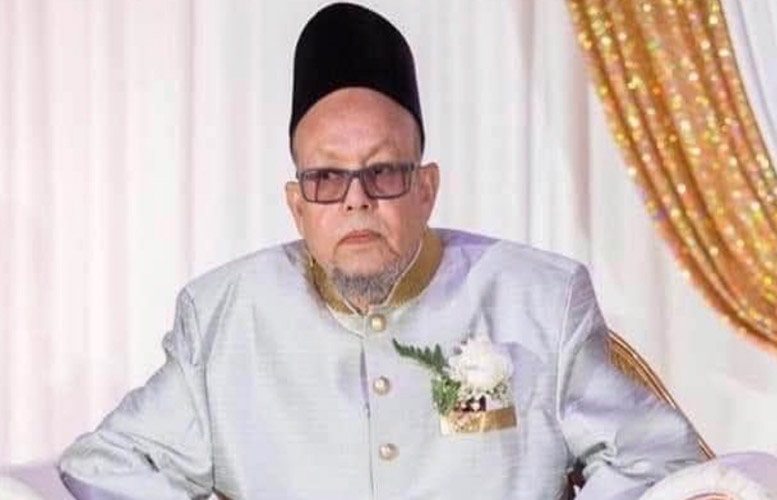 Ansar Ahmed, a well-known elder in the Bengali-American community, who touched the lives of thousands of new immigrants, helping them find jobs and resources, died on Friday afternoon.

Ahmed had been suffering from stage-four lung cancer, said his grandson, Mosleh Uddin. As many as 200 people, mostly from his community, held a prayer outside his house on the corner of Albion and Crosby Avenue last month for his health.

“We knew we wouldn’t see him again. He had limited time,” said Aheya Khan, who attended the prayer. Ahmed greeted the crowd from his upper floor window. Covid-19 prevented people from visiting him inside his house.

“My grandfather was a pillar in our community. Very well spoken and respected leader. Today the city of Paterson mourns his death as well over seas,” said Uddin.

Ahmed became a household name in the Bengali community. He helped thousands of new arrivals from Bangladesh make a new life in the United States. He understood the difficulties of starting anew in an alien land. He himself immigrated to the United States in 1974, when there very few Bengali families in Paterson.

“He was first to help out all the community people. He was educated and everyone came to him. He was willingly helping everyone,” said Ahmed’s brother-in-law Akkas Ali, who owns the BD Supermarket.

Ahmed also meditated disputes and conflicts within his community.

Ahmed was born in Sylhet, Bangladesh. After arriving in the U.S. from his war-ravaged homeland, he worked at a textile factory and as a school bus driver. He later became a tax preparer.

He was among the group that started the Jalalabad mosque in downtown Paterson, first Bengali mosque in Paterson. Before that, small groups of Bengali Muslims would gather in each other’s’ houses to offer congregational prayers.

Ahmed had five daughters. Disaster struck his family in 2001, when two of his daughters drowned in Rockaway Beach.

As the number of Bengalis in Paterson grew, Ahmed wanted political representation for his community.

“You should run for council,” Ahmed told Akhtaruzzaman in 2010. Akhtaruzzaman would become the first Bengali-American to win a seat on the City Council two years later.

Akhtaruzzaman did not believe he could win. Ahmed’s big extended family helped.

Ahmed himself was appointed to serve on the Library Board by former mayor Jeffery Jones in 2014.

The Passaic County Board of Chosen Freeholders honored him for his work in 2013.

Ahmed’s funeral prayer is being held in the tennis court area of Westside Park at 2 p.m. on Saturday.