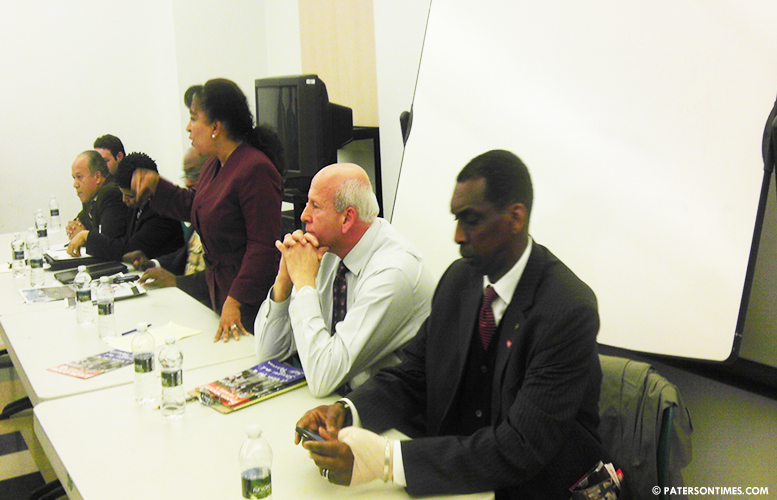 David Gilmore, city activist, attacked his opponents during a candidate forum at the Christopher Hope Center on Monday evening.

“If you think the last four years has been prosperous, you’d be just as crazy as the people telling you that,” launched Gilmore prior to unleashing his attack. Gilmore laid the city’s failure to build a salt dome on Montgomery Street squarely on Jeffery Jones, incumbent mayor’s shoulders.

“Montgomery Street landfill, it was taken over to house the salt dome, salt dome was never built,” said Gilmore.

Indeed, the city did take over that piece of land to build a salt dome; however, due to the dire financial straits of the city, officials could not find an inexpensive way to construct the salt dome despite having gone to bid several times for that purpose.

Gilmore then concluded that the lack of a salt dome was the main force behind the snow removal debacle the city suffered through after a heavy snowfall in early February. “Somebody crashed the salt dome,” said Gilmore, “and that’s why they didn’t have any salt.”

The activist said the city didn’t have a place to put the salt and that’s what caused the shortage. Jones quickly retorted saying, “That’s enough lies.”

Gilmore, who was delivering his closing remarks, asked “Did I interrupt you?” after the mayor spoke as he was giving his speech. “That’s a lie,” Jones repeated. At this point Gilmore attacked the mayor saying, “You need to shut up then.”

Members of the audience, well over 100 people, came alive with an expression of whoo, some telling the candidates, “Be nice. Be Nice.”

Gilmore then asked to have his time reset, each candidate was given two minutes for closing remarks. Pointing at Andre Sayegh, council president and mayoral candidate, Gilmore remarked, “Here’s a guy that is taking bribes,” alluding to recent revelation of Sayegh accepting campaign contributions prior to voting on resolutions having to do with companies that made the contributions.

“We got this guy that’s making believe he’s doing something,” said Gilmore of Jones before quickly switching gears and aiming his words at Sayegh. “We got this guy taking donations for projects and he wants to say something smart to me?”

The forum which was attended by all mayoral candidates save Rigo Rodriquez began in a strange way with Donna Nelson-Ivy, the city’s health department director, who is running against her boss, the current mayor, declaring that, “Currently, I’m the director of department of health and human services, so obviously I’m in the most awkward position here.”

Nelson-Ivy finds herself in an awkward and uneasy position because she is running against her boss. Nelson-Ivy, who gave her closing after Gilmore’s vicious attacks, dryly remarked, “I really don’t want to follow that.” The crowd broke into a laughter.