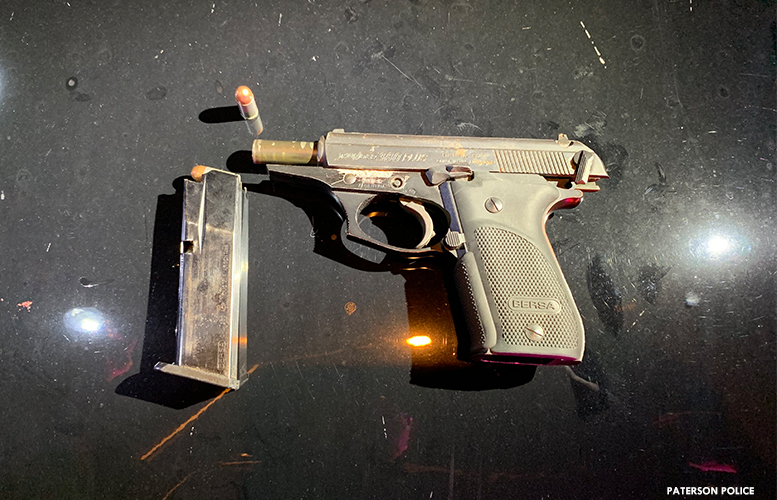 A suspect with a loaded semi-automatic handgun led police on a foot chase through downtown Paterson early Sunday morning, according to police.

Joseph Nieves, 20-year-old, of Paterson, was among a group of three men walking northbound on Curtis Place from Van Houten Street at around 2:51 a.m.

Police officers on routine patrol of the area took notice of the group and observed Nieves placing a black handgun into the front waistband of his pants.

Speziale drew his weapon and ordered Nieves to put his hands up.

Nieves hesitated and then fled north on Curtis Place towards Broadway, police said. Both officers began to pursue the armed suspect while ordering him to stop.

Nieves ran across the street, feigning a run towards Broadway. But continued on the sidewalk along Curtis Place, running back into the street. An unidentified Good Samaritan in a Jaguar vehicle saw what was taking place and accelerated towards the suspect and cut him off, helping the officers in their chase.

Speziale caught up with the suspect and placed him under arrest. Culmone stepped over the guardrail and recovered a defaced Bersa Thunder 380 Plus semi-automatic handgun loaded with a 15-round high capacity magazine, police said.

The recovered weapon will be sent to the New Jersey State Police Ballistics Lab for further examination, police said.