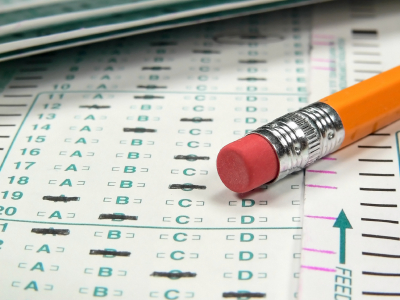 One of the major controversies surrounding school reform, implementation of the Common Core Standards, and standardized testing is the emphasis that is put on those tests with regard to a student’s progress and a teacher’s effectiveness. This emphasis gives standardized test scores alone precedent over many of the other indicators of a child’s ability to succeed in school and a teacher’s ability to do his her job and do it well.

But the Paterson Public Schools face a unique situation regarding testing and assessing.  It isn’t the fact that we test and we assess.  The problem is that we test and assess far too frequently.  This disrupts the learning process every five or six weeks with a long series of various tests and assessments taking precious days and sometimes weeks before teachers can even attempt to get their classrooms back to curriculum based instruction.

During the months of March and April teachers in every discipline (including physical education and the arts!) were required to give a post assessment, (used to quantify the student’s overall growth during the course of the school year and which now accounts for fifteen percent of a teacher’s summative evaluation);  something called the STAR Renaissance test (given a minimum now of three times a year, the STAR test runs two consecutive days, is unaligned to the curriculum  and is generated by a private consulting company, paid for out of the school budget at a cost of millions of dollars);  the New Jersey Department of Education Unit 4 assessment (these are given five times a year and can take as many as five days to administer and were implemented by the State of New Jersey in lieu of the Paterson School District’s having an acceptable math and language arts curriculum).

For math and language arts classes this amounted to three solid weeks of continuous testing and assessing!  Now, add HSPA, PSAT, PARCC, SGO Baseline, mid-terms, final exams, routine testing and you get some idea of what is happening in our classrooms.

(Some of the following contains quotes from and abridgements of an op-ed piece published in a recent Hechinger Report and signed by the entire faculty of P.S. 167 – The Metropolitan Expeditionary Learning School in Queens, New York.  I’ve requested their permission to include it here because it sums up perfectly how the new wave of school reform implementation is impacting students and teachers.)

“For students, these tests and assessments have become the centerpiece of their educational experience.  Time spent on these tests is time not spent on learning or teaching.  The centrality of testing and assessing should be shocking, but instead is somehow accepted as the norm.”

The impact on the students has been enormous. When I recently asked some of my students how they felt about the amount of testing and assessing that has been implemented this year the most frequently heard words and phrases were “stressful”, “unnecessary”, “exhausting”, even “ridiculous” and “bizarre”.

There is little ambivalence among the faculty members about the waste of time, resources, and student potential these tests represent. Good teachers have always performed assessments of their students making the current frequency of these tests unnecessary and redundant.

“At the end of the day, we hope students see their educations not only as a means to graduate, jump-start their careers or get into college, but as a means to investigate, interact with and innovate in a rapidly changing world.  As John Dewey reminds us, “Education is not preparation for life, but life itself.”  We believe in a curriculum that is rich and personal – that is, for the living.  To treat curriculum and schools otherwise is to demean education, reducing it to no more than training or indoctrination in a world that needs people to be so much more.”