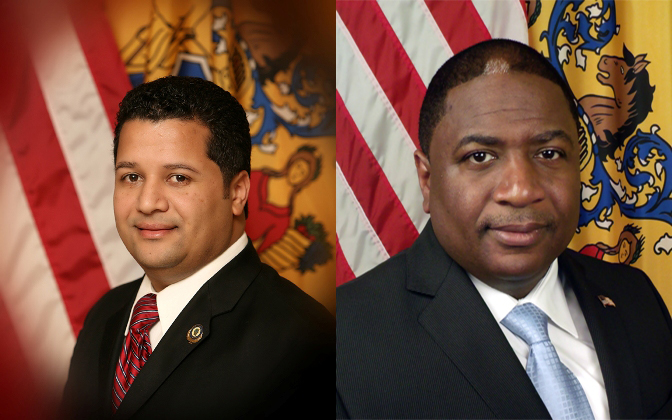 Both outgoing councilmen were presented with framed resolutions from a grateful governing body for their services to the city.

“I came here to keep it real and that will be my legacy,” said a reflective Rodriguez accepting the resolution. Indeed, Rodriguez “kept it real” for property owners by never once voting for a tax increase in his two-term as councilman, said Rodriguez following the meeting.

It was tough growing up in a rough city, expressed Rodriguez. “My parents couldn’t give me a better education,” said Rodriguez, alluding to his origin from a poor family with little money to fund a four-year degree.

Rodriguez said he made the best of the circumstances he was given and having climbed to the city council is a testament to that. With his voice breaking, Rodriguez said, “I had to struggle to come up, through the struggles, I think I done well.”

Rodriguez, who owns Rigo’s Dayton on Grand Street, said he did his best to serve the city’s residents. James Staton, a city pastor, recalled during hurricane Irene when the 1st Ward was underwater, Rodriguez was there comforting residents during their time of need.

The other outgoing councilman, McDaniel (pictured right) was handed the framed honoring resolution by Ruby Cotton, 4th Ward councilwoman. “I look forward to you coming back,” said Cotton.

A stoic McDaniel, known for being the diplomat in a hot-headed council, said, “I don’t know if I will be back in this particular role, but know Paterson I’m going to continue to serve and we’re going to fight the good fight for Paterson.”

McDaniel, vice-principal in Passaic County Technical Institute, had a short, two-year, tenure. During his two years, McDaniel passed an anti-loitering ordinance that allows the police to crackdown on troublesome youths, who often end up being victims of shootings, hanging about grocery stores and corner shops.

“We hope that you do not go off into the sunset,” said Sumter to McDaniel encouraging the councilman to remain visible in the city.

Rodriguez has indicated he intends to return to the council sometime in the future, but before doing so, recognized the council member, he must beat election fraud charges levied against him from his 2010 at-large race.

“You know my name has been tainted,” said Rodriguez while slightly weeping. “I never did anything malicious.”

In the recent municipal elections, Rodriguez lost his bid at the mayor’s seat while McDaniel couldn’t muster enough votes for a full term in the council. Alex Mendez and Maritza Davila are to succeed the outgoing councilmen on July 1st.

Jane Williams-Warren, city clerk, who is retiring in December, thanked both councilmen for their services to the city.