The city’s overall crime numbers in 2016 were the lowest it has been in almost 30 years, according to crime statistics made public on Monday afternoon. 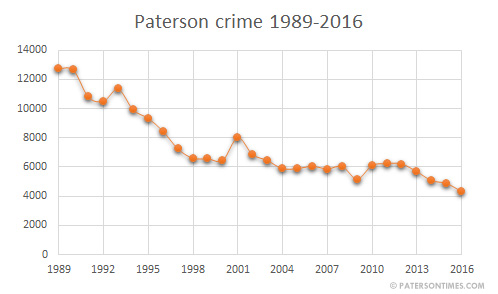 “I am pleased and encouraged by the UCR report, as overall crime in the city Paterson is at its lowest in nearly 30 years,” said mayor Jose “Joey” Torres. “I have every confidence in Director Speziale‘s leadership and the Paterson Police Department’s that crime will continue to be reduced in our community thus improving the lives of all Patersonians.” When he took office in 2014, the number of killings in the city was at a 27-year high, according to New Jersey State Police statistics. That year, there were 25 killings. The city saw the fewest murders in 1996, according to data.

Police director Jerry Speziale attributed the steep drop in overall crime to a variety of initiatives the department has undertaken over the past two and half years. Upon returning to Paterson, Speziale collaborated with community groups to build police legitimacy in neighborhoods to encourage residents to cooperate with police in making their streets safer.

“Much of the reason for the steady decrease in crime over the years can be attributed to the hard work and dedication of the men and women of the Paterson Police Department,” said Speziale.  “Together, with the administration we will continue to work together to find new and innovative approaches to further reduce crime and improve our resident’s quality of life.” 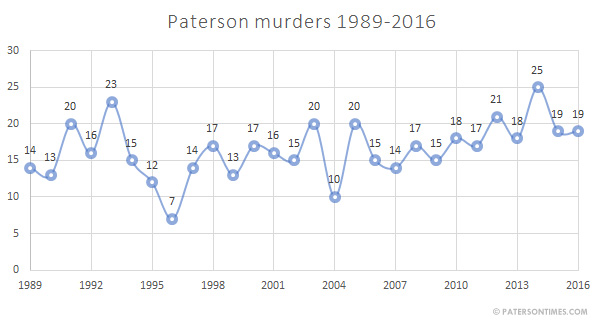 Speziale recognized the city has to do more to reduce the number of homicides in the city. The Torres administration unveiled the Safe City Initiative in early 2016 to connect the one-percent that’s most likely to be killed or kill someone to social agencies to give them a last chance to turn away from the street to a productive life.

Torres has also hired new police officers every year to maintain a level of staffing at the police department. The administration’s crime fighting efforts were also aided by designation of certain commercial stretches as hotspot crime zones where troublesome businesses are forced to close at midnight.

“Crime fighting and instilling trust in the community is a continuous work-in-progress and we will continue to diligently fight towards making Paterson a safer city,” said Speziale.