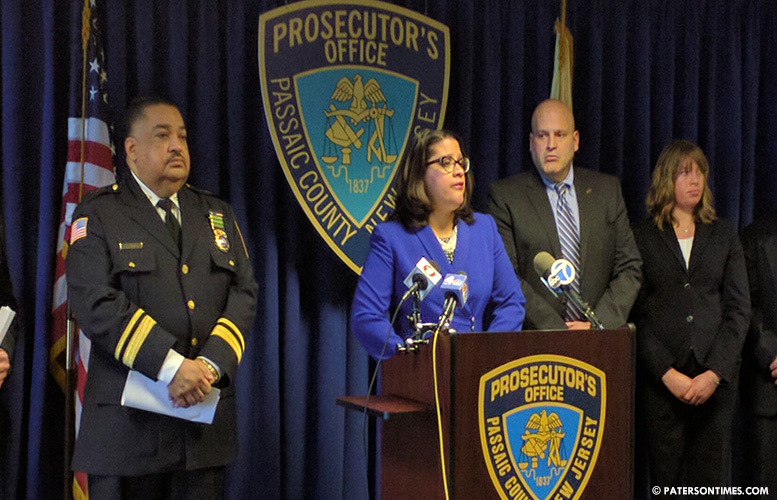 Valdes said the 4 boys and 2 girls ages 13 to 16 are all Passaic County residents. She said three of them ran two social media sites called “P-Paterson Purge” and “P-Passaic Purge” which were used to disseminate explicit images of other teenagers.

Three girls – 2 from Paterson (13 and 15) and 1 from North Haledon (15) – had their nude images posted on the sites. The victims voluntarily shared photos of themselves with their boyfriends or others they were interested in, who sent the images to the three individuals running the social media sites and the images ultimately went public.

“The victims did not consent to their pictures going public,” said Valdes. She said this is a cautionary tale for those who share explicit images.  “The bottom line is do not share pictures of yourself on the internet or elsewhere especially if you are a young person. “

She urged victims who find explicit pictures of themselves posted on the internet to contact law enforcement.

The three victims in this case notified law enforcement that started a yearlong investigation on December 2015. Investigation involved the Passaic County Sheriff’s Office and police departments from Paterson and North Haledon.

Police charged the three teenagers – a 14 year boy and two 15 year old girls — who created the social media accounts with four child pornography charges. Each host teen was charged with distribution, maintaining, and possession of child pornography. They were also charged with cyber harassment, said the prosecutor.

“The two sites were taken down almost as soon as law enforcement learned of their existence. Regretfully, there are similar sites popping up especially with the word ‘purge’ in them,” said the prosecutor. She said these sites are being used by elementary, middle, and high school students.

Authorities would not say which social media network was being used to distribute the images. She said the Paterson site had 1,300 followers while the Passaic site had 3,000. She said the hosts would send messages that read: “DM us nudes,” and “Community full of thots. Will start exposing at 7:30.”

Authorities said all six were arrested in the past few weeks, processed, and released to their parents. Three hosts face 11 years and the three providers face 8 years of custodial sentences, authorities said.

“Juveniles and the public should know when they are active on social media they leave behind a digital foot print that can lead law enforcement right to them,” said the prosecutor.