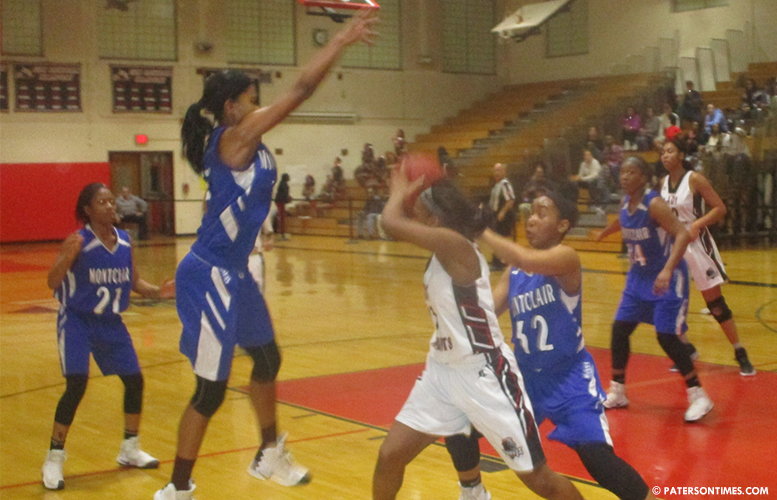 In a valiant effort on their home court, Paterson’s John F. Kennedy High School’s girls’ basketball squad went down to defeat at the hands of Montclair by a final score of 54-40.  Despite scraping and scrapping for the entire ballgame, the Lady Knights succumbed to a cold shooting spell in the second half and a brilliant performance by the Mounties’ Division I prospect, senior guard Alisa Wiggins.

A flurry of shooting and rebounding saw Kennedy grab an early 10-8 advantage. JFK point guard Latice Cunnigham then drove to the right of the lane, twisted in mid-air, and hoisted a bank attempt. Although the shot bounced off the rim, the stalwart senior was fouled and netted the two subsequent free throws. The squads then alternated turnovers with a Knights travelling call and an errant Mountie pass. Soon thereafter, Cunnigham charged up-court, drove right at the top of the lane via a pick from Kennedy senior center Jayla McDuffie, and fired to senior Cha’liya Brown on the right wing who hoisted a three-point swish.

Montclair’s Gabby Isola was then fouled in the act of shooting and converted one of two free throws. Cunningham countered by driving to the right of the lane and pulling up for a 10-footer.  The Mounties’ Jillian Jennings then found Wiggins in the middle of the paint for a two-pointer in heavy traffic.  Cunningham followed with a pass into McDuffie who kicked out to senior guard Taylor Yancey for another JFK three.  A McDuffie rejection and desperation Montclair unsuccessful long bomb concluded the first quarter with the Mounties holding an 18-13 lead.

The second frame saw Jennings open with a defensive rebound for Montclair.  Wiggins missed a runner but captured her own rebound for a put-back.  Shortly following, Wiggins knocked down a trey.  A duel in the lane followed between McDuffie and Montclair senior Tahj Ballard.  The former won the confrontation by blocking a shot attempt.  However, Wiggins followed with a coast-to-coast score for the Mounties.

Montclair sophomore Bianca Fede then picked off a Knight pass and roared up court to combine with Jennings for a convoy completion.  With Montclair gaining a 4-point edge, 22-18, Kennedy Head Coach MarQuette Burgess called a time out.  The strategy worked as the Knights’ McDuffie and sophomore forward Taniesha Gilbert combined for a score.  However, Wiggins countered with a 20-footer from the right of the key.  Jennings and Fede followed with a steal and fast break conversion for Montclair.

Immediately upon entering the contest for the Knights, freshman guard Ayanah Young battled for a rebound.  However, Wiggins again responded, this time with a 15-footer from the right of the free throw line courtesy of the offensive Mountie weave.  Senior Anna Gottesman then entered the game for Montclair and provided immediate spark.  Missed shots by both squads resulted in a 30-26 Montclair lead as the first half buzzer sounded.

The second half’s inception was marked by a flurry of miscues and missed inside shots by both squads.  Montclair’s Fede then fired to senior Jalynn Allen who was fouled in the act of shooting and dropped in both offerings from the charity stripe.

Montclair’s defense then frustrated the Knights.  A patient offensive JFK effort with many passes yielded no fruit.  Eventually Fede pick-pocketed a Kennedy pass and assisted to a racing Wiggins for a full court drive and score.  Kennedy’s Cunningham then went to the free throw line and missed the second of two attempts.  However, Gilbert snatched the rebound and the Knights kept possession.  Montclair’s Fede countered with two successful penalty shots.

The Mounties lead grew to 10 points, 36-26.  Wiggins then charged up-court, blanketed by Brown.  A dramatic collision drew no whistle.  Fede capitalized with a 10-foot jumper from the right baseline.  Cunningham then answered with a determined score from inside the paint.

The fourth quarter was marked by more competitive play.  Wiggins warmed up from outside with a 20-footer.  Jennings then slipped behind the Knight half-court trap and converted two foul shots.  Several Montclair back door attempts failed, yet Wiggins eventually canned a 3-point rainbow.  The game was momentarily stopped as the long swish marked the 1,000 point of the Division I recruit’s stellar career.  Montclair Head Coach Paul Palek and Wiggin’s teammates converged at half court to congratulate their hero.

When play continued, try as they might, the Knights were unable to whittle away at the Montclair lead.  The final frame was highlighted with Cunningham driving into the lane and netting several spectacular jumpers.  However, desperate defensive endeavor by Kennedy resulted in a parade to the free throw line by the Mounties.

“Our kids had to play great to win tonight,” Palek commented.  “If it had not been for the injuries Kennedy suffered this year they probably would have gone all the way.  It was a great honor to be on the court when Alisa scored her 1,000 point.  She’s been a great player to coach and I wish her the best at the next level.”

Wiggins led Montclair with 34 points including four 3-pointers.  Fede dropped in 11 and Jennings added 5 for the Mounties.  The Knight scoring was headed up by Cunningham with 15 tallies.  McDuffie notched 12 points for the Knights.  Yancey and Gilbert contributed 5 and 4 scores, respectively.