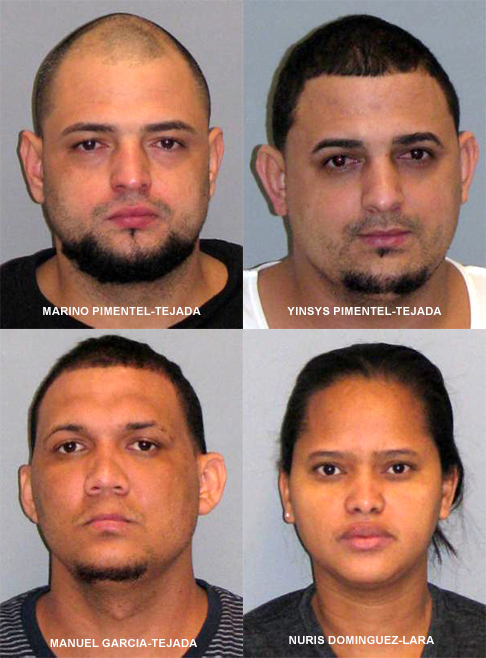 The top-ranking member of a heroin distribution ring and three associates were given prison sentences on Thursday for running a heroin mill in Paterson that unloaded thousands of bags of heroin onto the streets.

Detectives arrested Marino Pimentel-Tejada on June 1, 2016. He was in a vehicle with 135 bricks or 6,750 glassine envelopes of heroin and several methamphetamine pills on East 28th Street with Robert Grady.

State Police searched his house in the 1100 block of East 24th Street and his car. Detectives discovered a heroin production facility in his home. A table was found overflowing with glassines containing heroin, numerous boxes of empty glassine envelopes.

79 grams of raw heroin, 3,791 glassines of heroin, grinders, sifters, a digital scale, empty glassines, and other packaging materials was seized. In his car $20,000 was found and inside a hidden compartment was a handgun and shotgun.

“By putting these large-scale suppliers in prison and dismantling their heroin mill, the State Police cut off a major source of heroin in the region and undoubtedly saved lives,” Attorney General Christopher Porrino said.

Authorities said Grady pleaded guilty to methamphetamine possession and faces five years in prison. His sentencing is scheduled for April 24.

“Paterson is a regional hub for heroin distribution and these were major suppliers we took out of commission,” Elie Honig, director of the Division of Criminal Justice, said.

“All too often, these mills are not only responsible for manufacturing the poison that is heroin, but they are responsible for the violence that goes hand-in hand with drug trafficking,” Colonel Rick Fuentes, superintendent of the New Jersey State Police, said. “We will continue to shut these mills down, arrest those responsible, and work with our partners to ensure successful prosecution.”