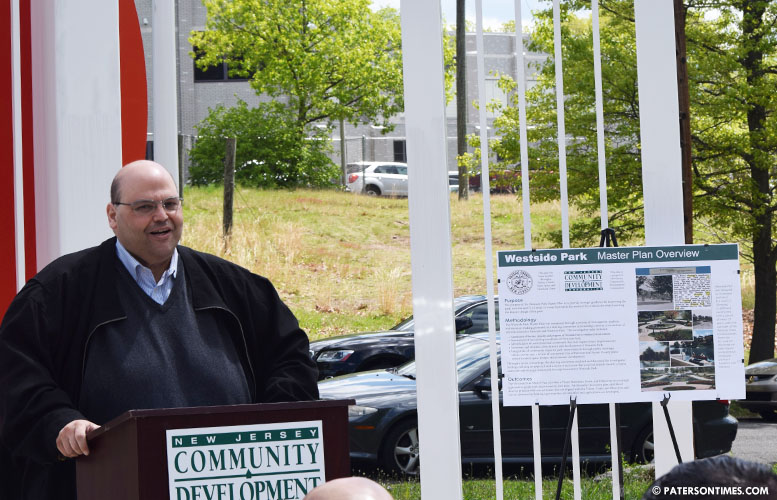 The renovation of historic Westside Park moved a step closer on Tuesday afternoon with the unveiling of a master plan for the 26.6-acre park which contains the city’s oldest structure that once hosted general George Washington.

With a finished master plan organizations with a deep interest in seeing the park restored like the New Jersey Community Development Corporation (NJCDC) will have a much easier time securing grant funding from sources like county and state open space programs.

The plan identifies a total of 17 projects to fully renovate the park. Of that number 9 have been set aside as priority projects to immediately allow for the public use of the park. Those 9 projects carry a price tag of $7.85 million.

Priorities include restoring access to the Passaic River by repairing the four boat launch stairways to allow for canoeing, kayaking, and rowing, repairing the Totowa Oval that supports sports like baseball,

There’s also plan for an improved entrance from Totowa Avenue, better circulation within the park and a renovated parking area, dredging Molly Anne Brook and the Passaic River, and building a pedestrian bridge to recently renovated Pennington Park.

“This is a park that has fallen into disrepair. We want to bring it back to life. We want to restore it to its former grandeur,” said Bob Guarasci, president of the New Jersey Community Development Corporation. “This park is one of Paterson’s crown jewels.” His organization secured an $85,000 grant through the Passaic County Open Space and Farmland Preservation Trust Fund to conduct the study.

The idea is to tackle the 9 larger project over a 5 to 10-year period. This piecemeal approach will allow community organizations to apply for and secure grants to pay for each portion of the project.

“This plan is a doable plan,” said mayor Jose “Joey” Torres, who thumbed through the 54-page plan, mentioning the estimated $7.85 million for the 9 prioritized projects. He expressed particular interest in restoring the boat launch stairways to allow for boat racing at the Passaic River.

Torres said his administration is moving to renovate the historic Van Houten House which is the oldest structure in the Silk City and is listed in the United States Register of Historic Places. President George Washington spent some nights as guest at the house in 1780. The structure was built in 1741, but burned down and had to be rebuilt in 1831.

Akhter, who lives in Paterson, compared the Westside Park to Central Park decades ago. “Central Park is considered one of the greatest parks in the world. But 20-30 years ago, you wouldn’t walk through Central Park. People thought it was a dangerous zone.”

Having a master plan helps with county open space applications, said county officials. The plan was completed over the course of more than a year. 200 people completed surveys to formulate the master plan. While Parsippany-based RBA Group was conducting the plan study, a new fact came to light.

With a plan in place, Guarasci said his organization is prepared to submit applications to secure funding to undertake some of the projects listed in the plan.

The full restoration of the park or the 17 projects will cost as much as $20 million. Westside Park is owned by the City of Paterson. It was first constructed in 1889 along with Eastside Park. Both parks are the oldest in the city. The park has suffered from neglect in recent years and sustained damage from both hurricane Irene and Sandy.

“We now have a plan. We can come up with a plan to make this reality,” said Guarasci.