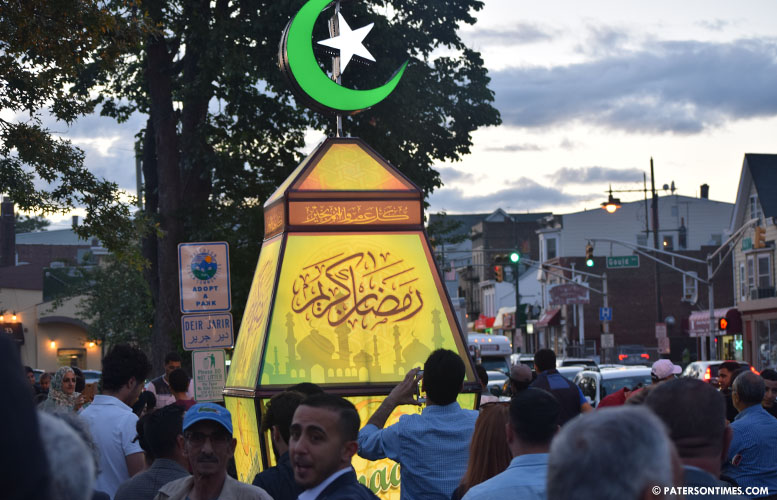 Dozens of Muslims gathered at the South Paterson Park just before sunset on Friday to usher in the holy month of Ramadan with a lantern lighting. The 17-foot lantern, called a fanous in Arabic, was lit up wishing the city’s large Muslim community a happy Ramadan.

Muslims go without food and water from dawn till dusk for the month. “This month is very special to us because the Quran was revealed in the month of Ramadan,” said imam Mohammad Qatanani of the Islamic Center of Passaic County.

Qatanani called for unity among the city’s various ethnic communities. “We’re all one family,” he told the crowd of almost 100 people who gathered at the park. With the election of a new U.S. president many of the minority communities that call Paterson home have felt targeted. Muslims were the first group targeted by the new administration with its travel ban. In South Paterson, hundreds of people from the city’s many different ethnic groups protested the ban in solidarity with Muslims.

“Thank God we live in Paterson,” said Al Abdelaziz, chairman of Paterson Planning Board and former city council candidate. “They support our community,” he said pointing to the many elected officials who attended the gathering among them state senator Nellie Pou. There were several council members and members of the Passaic County Board of Chosen Freeholders – including the first Muslim Passaic County freeholder Assad Akhter — at the event.

Abdelaziz urged Muslims to invite their neighbors for iftar, a big meal eaten to break fast at sunset, to build bridges with other communities. “We need not to isolate,” he said. His family and deputy mayor Riad Ammar, known by his nickname Ray Baker, made the fanous lighting at the park a tradition in the city.

This is the second year the lantern lighting has occurred. “It’s a trend we’re starting to see throughout North Jersey,” said Abdelaziz. A group in Union City held a lantern lighting on Friday and another group is holding a similar event in Clifton next week, he said. As part of the Ramadan lantern ceremony, the organizers installed banners above Main Street wishing a “Ramadan Mubarak” – translated as happy Ramadan.

The donated foods are estimated to be worth more than $1,000, said the organizers.

The city’s Muslim community which is as diverse as the city itself attended the gathering. There were the Arabs, Circassians, Bengalis, Turks, and other smaller groups that call the Silk City home.

“We accept all in Paterson,” said Andre Sayegh, 6th Ward councilman. He represents the South Paterson section which is home to the largest Muslim population in the city. He was able to secure park improvements from PSEG for the South Paterson Park.

Qatanani is predicting a 29-day Ramadan; however, that depends on the moon. Muslims start fasting tomorrow.