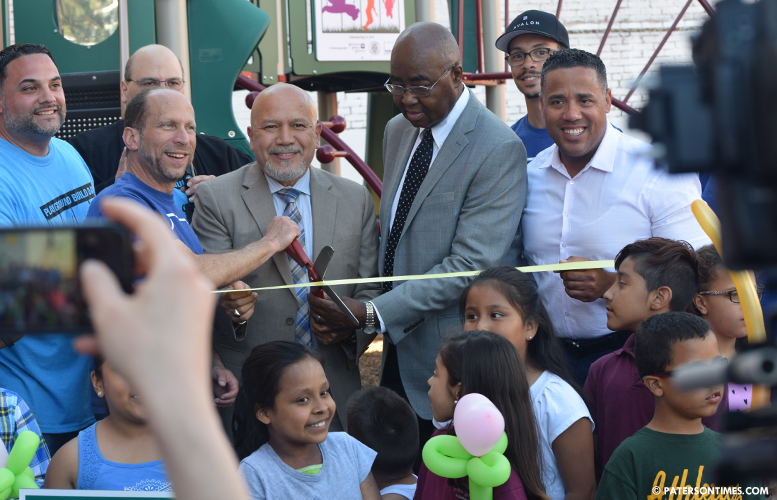 School 3 doesn’t have a gym. It also didn’t have a play area until Wednesday afternoon. This made recess dreadfully boring for third grader Gissel Pazos.

“It’s more fun than running around. It’s more exercise,” said Pazos, 9, after the playground was upgraded. She and other students intend to use the playground during recess, she said. 128 volunteers from Virginia-based AvalonBay Communities, a real estate investment firm that manages more than 82,500 apartments in 10 states and the nation’s capital, spent an entire workday installing the upgrades.

“It’s as rewarding for us to be part of this as it is for you and the community and the children that will benefit from it,” said Ronald Ladell, senior vice president of AvalonBay Communities, to a playground that was packed with children, parents, school staff, and community leaders. “We enjoy giving back to communities throughout the state. It’s part of our DNA and fabric.”

The playground renovation cost $67,600. Ladell’s firm contributed $17,600 of that amount and the City of Paterson put in $50,000 from its federal Community Development Block Grant (CDBG) program funds.

“It’s money well spent,” said Luis Velez, 5th Ward councilman. He represents the area where the school is located. He has been pushing for more recreation for the 5th Ward and views the playground as a positive step in that direction.

“This particular location was important to one individual,” said Ladell mentioning Angel Arnau, a maintenance technician, who went to School 3 in the early 1990s. Arnau’s stepson graduated from the school last year.

“It’s nostalgic. When I came here it was all blacktop. The garden wasn’t there. Now, coming back to help out with the garden and putting in a playground it feels great,” said Arnau, who lives in Railway section,

Arnau has been working for the firm for the past three years. He and others also applied a fresh coat of paint to the school’s fence.

“All the children are talking about the playground,” said Matilde Garcia, who has a girl and boy enrolled at the school. Indeed, when mayor Jose “Joey” Torres invited the children onto the newly built playground, the eager students quickly filled the play area.

Torres had to get the children off the play equipment when he was told the concrete is probably still wet.

“They didn’t have somewhere to play before,” said Fidelina Gamez. She has four children who attend the school, she said. Her daughter Claudia Olivero, a 6th grader, said the school doesn’t have a library.

Olivero said she wants to change that. She has been building support to urge school officials to create a library at the school. When asked, why bother with a library when she will be leaving the school in two years, she replied, “I love reading. I want my brothers to have an education where they can grow up, read books that will [spark] their imagination.”

So far, she has her mother as a supporter and several friends.

Steven Rodriguez, principal of School 3, said the Paterson Public Library’s mobile library stops by at the school which allows students to check out books. He said the school lacks the space to house a library.

The school has 448 students, said Rodriguez. Some of those students have to attend classes in trailers due to lack of space inside the 118 years old building.

“It’s long time coming,” said Rodriguez about the new playground. He said the 12 benches with plants on both sides and the new playground will beautify the old school. “It’s going to create a real community atmosphere.”

The planters are currently empty. Bob Guarasci, president of New Jersey Community Development Corporation (NJCDC), said his group will handle planting another day. He said he may enlist students from the school to help with the planting to create a sense of ownership.

“I think that will be a great summer project,” said Guarasci. He has been playing a key role in building playground at different schools. This is his 7th playground, he said.