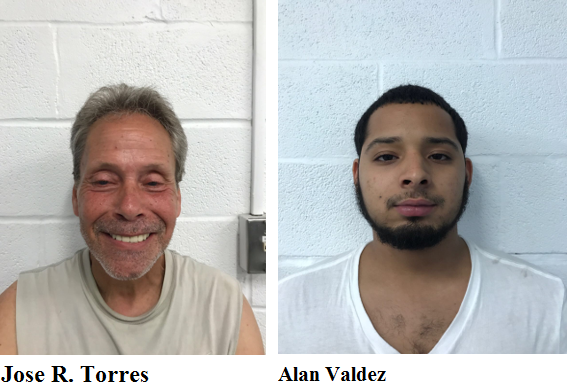 Alan Valdez, 21, and Jose R. Torres, 62, both of Paterson, were allegedly caught conducting a drug transaction on Monday afternoon.

Valdez returned to the vehicle and the car departed the area. Detectives pulled over the vehicle on East 23rd Street and 18th Avenue. Valdez got out of the vehicle and began to run away from detectives, authorities said.

Valdez discarded 280 glassines of heroin behind 829 East 23rd Street during a foot pursuit, authorities said. He put up a struggle with detectives. One detective suffered a broken finger while making the arrest, Berdnik said.

Detectives returned to 775 East 22nd Street and arrested Torres. A search led to 20 glassines of heroin on him and an additional 6,550 glassine envelopes of heroin within his reach, authorities said.

Berdnik said detectives conducted the investigation after receiving a tip from a concerned citizen.