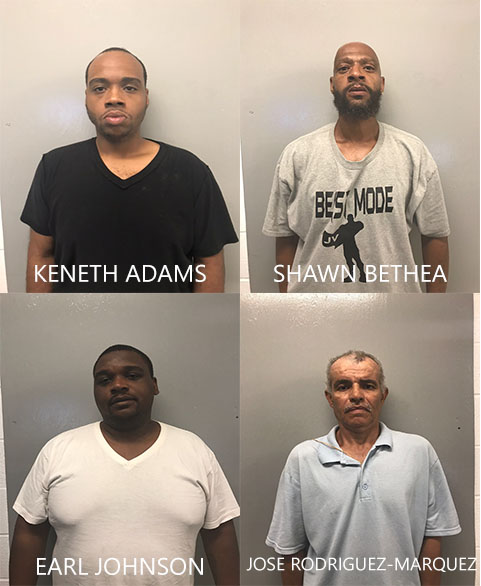 A city man and three others were arrested on drugs and weapons charges in a North 4th Street narcotics operation on Monday afternoon, according to Passaic County Sheriff Richard Berdnik.

Drugs and guns seized in the operation

A revolver and a rifle as well as heroin and crack cocaine were seized in the operation.

Bethea was observed at around 5 p.m. on the house’s porch holding small white items. He allegedly stepped off the porch and conducted a drug sale with Rodriguez-Marquez.

Detectives stopped Rodriguez-Marquez when he left the vicinity of the house. He allegedly had two glassine envelopes of heroin.

As detectives continued their surveillance, Bethea met with Johnson. Bethea was placed arrest, but Johnson slipped away.

Detectives searched the house. Johnson’s room had a .357 Ruger Revolver reported stolen out of Pennsylvania, 70 glassine envelopes of heroin, and 5 grams of crack cocaine. $288 in cash was confiscated in the search.

Johnson later returned to the house and was arrested for the items found in his room. A fourth man, Adams was inside the house during the search.

Rodriguez-Marquez was released and the other three are being held at the Passaic County Jail.