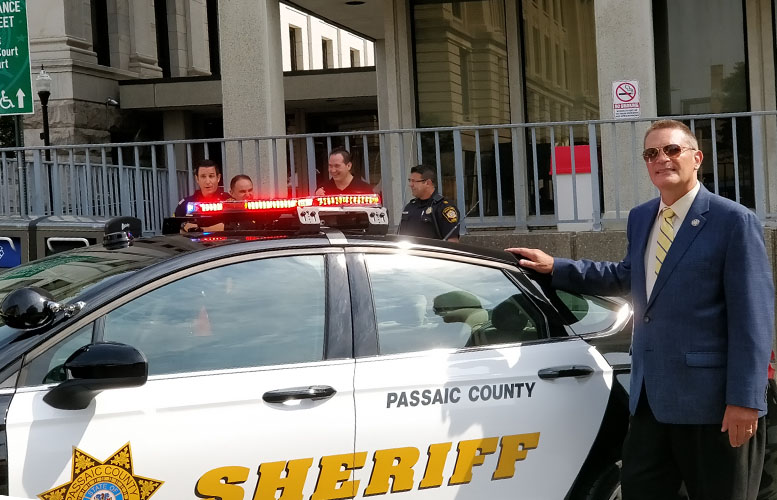 Berdnik said the vehicles will produce “substantial” savings for Passaic County taxpayers. Both vehicles cost approximately $47,000 and are being covered using civil processing fees. He also points out the side doors of the vehicles, which display the sheriff’s insignia, were not painted, but plastic wrapped saving the county money.

“Saving taxpayers money is one of the key component of this,” said Berdnik. Both vehicles will be assigned to the Civil Process Unit which travels throughout Passaic County serving subpoenas, legal documents, and executing evictions.

Low gas consumption and better mileage (more than 40 miles per gallon) will obviously produce savings. However, it’s not clear exactly how much in savings county taxpayers will see. Berdnik said after six months a review will be conducted to figure out the actual savings the vehicles are producing.

These cars are not suited to be pursuit vehicles. Patrol vehicles require what’s called a “police package,” a vehicle specifically designed for law enforcement use. The sheriff said the police package for the Ford Fusion will likely be released in 2018.

Berdnik’s agency is the latest to acquire hybrid cars. His two hybrids also have display boards atop the vehicle, under the emergency lights that allows for marquee messages. One of the vehicle’s message directed pedestrians to the crosswalk.

“This is a test so to speak. If it works well, we’ll progress to individualized units, detective cars, and patrol,” said Berdnik. “The idea is to save on fuel.”

The six-month review will determine whether the county law enforcement agency acquires additional hybrid vehicles. The sheriff’s office has 150 vehicles in its fleet – this includes SWAT vehicles.

Both vehicles had to be fitted with law enforcement computers and decals for the sheriff’s office. This was done in-house, said undersheriff Joseph Dennis.