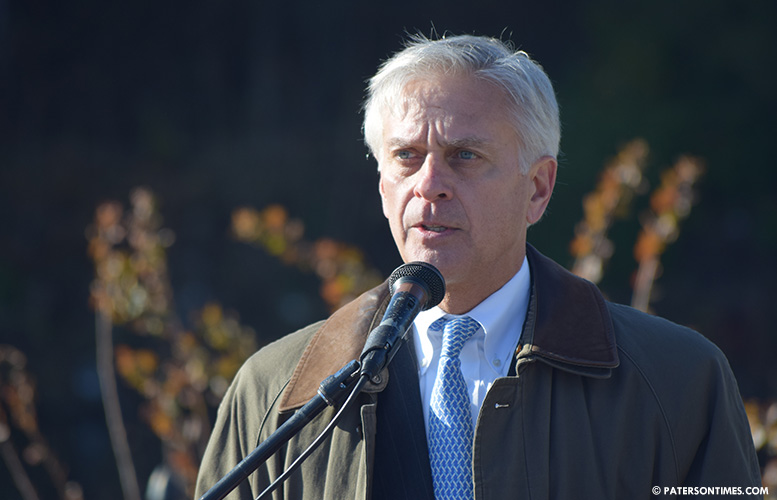 The proposed microgrid at the Great Falls will ensure critical infrastructure like public safety buildings and medical centers are not knocked offline during a blackout, said Richard Mroz, president of the New Jersey Board of Public Utilities, on Monday afternoon.

Mroz’s board approved $173,000 in funding to the city to conduct a feasibility study to turn the existing hydroelectric plant at the foot of the Great Falls into a microgrid. This grid will power key municipal, county, and school district buildings power ceases to flow from the electrical grid.

“As we learned from Superstorm Sandy, keeping diverse critical facilities such as medical centers, police and fire departments, shelters and schools powered and operational is critical during a natural disaster,” said Mroz (pictured). “I’m excited this project proposes to use the historic Great Falls as a central component of the town center microgrid. In doing so, we will build upon Thomas Edison’s Electric Company plan of a 4,849-kilowatt hydroelectric facility that operated from 1914 until 1969.”

Mroz said the feasibility study will identify the actual cost for the project. He said there are state and federal funds available to cover the resiliency project. There’s also the possibility of private investment.

Morristown-based Eagle Creek Renewable Energy presently leases the hydro plant which has the capacity to generate 3.5-7 megawatts of power depending on flow of water. This capacity could be increased with new technologies like solar, cogeneration, new distribution assets, storage, and other novel electric infrastructure. Robert A. Gates, executive vice president for the firm, would not say whether his firm intends to make an investment in the microgrid.

There were talks of the city taking over the electric plant after the firm’s lease ends in 2021. Former mayor Jose “Joey” Torres, who proposed the microgrid at the Great Falls, wanted the city to directly generate and sell electricity. He wanted the microgrid to power the historic Hinchliffe Stadium which is currently being renovated in phases.

“The Great Falls have been at the center of innovation and economic development for over two hundred years, it is fitting that today we are able to propose its power again as an important hydroelectric resource, for our city and the region,” said Williams-Warren.

Rep. Bill Pascrell described a microgrid for Paterson as an “outside the box” idea. He sent a letter of support to the New Jersey Board of Public Utilities for the project.

“The sooner we get away from fossil fuel the better,” said Pascrell, a former mayor of Paterson. The congressman’s support is likely to save the microgrid project. Some have begun to criticize and oppose all projects that have been touched by Torres.

It could also power the Robert A. Roe Federal Building and Saint Joseph’s Medical Center and Children’s Hospital.

Mroz said the microgrid in Paterson is 1 of 13 in New Jersey that received funds for feasibility study through the Town Center Microgrid Feasibility Study program. This program had a budget of $1 million, but that was doubled to $2 million to provide funds to all 13 resiliency projects.

Paterson’s study is currently in the preparation phase and is expected to be completed in six to nine months, said the president.