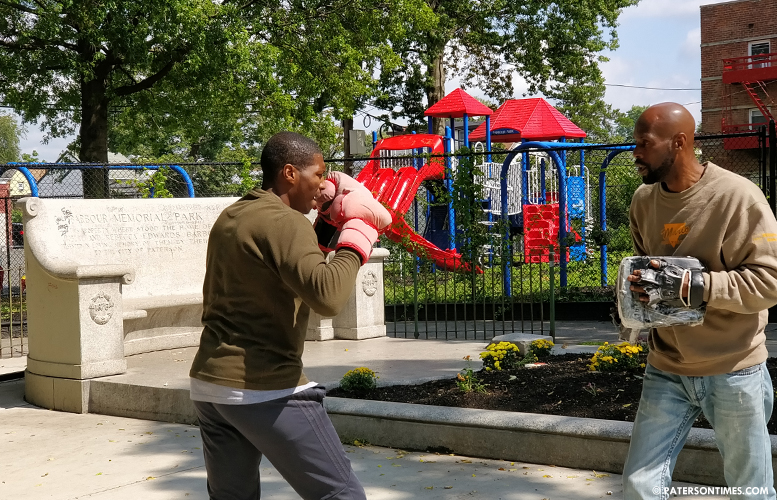 The scraggy man was sleeping off an evident drug high on the soft grass of Barbour Memorial Park on Thursday afternoon. His sleep was disturbed by community activist Ernest Rucker and two security officers with guns on their waist.

Both armed officers will be stationed at the Broadway park from 12 p.m. to 12 a.m. for the next 60 days in an effort spearheaded by prominent real estate developer Charles Florio to prevent vandalism and to provide a safer environment for young people and neighborhood residents.

“The needles. The drugs. The addicts,” said Florio when asked what prompted him to post private security officers at the park. He is spending $1,000 per day or $60,000 to provide the armed guards.

Florio owns 50 properties in the vicinity of the park, he said. “I’m a business man. If you make an unsafe city, safe, the value of real estate goes up. I’m not Jesus Christ.” Paterson has the ninth worst real estate market in the United States, according to personal finance website WalletHub, which looked at median home price appreciation, home sale, turnover rate, and job growth.

The developer criticized police, whose headquarters is located 0.5 miles away from the park, for failing to rid the park of drug users. Police brass have often complained about lack of manpower in the department to adequately patrol local parks.

“Do more with less,” said Florio. Police’s failure forced him to post his two-person security force at the park. Both men will still have to work with the local police. He said the guards will patrol the park and contact police when the need arises.

“I believe the idea is tremendous. The community has been busting its back cleaning this park,” said Rucker, who ordered the man sleeping on the grass up and out of the park. Residents have put in time and energy planting flowers, installing a miniature library, and making other improvements only to find it vandalized not once, but twice.

Rucker said the drug users vandalized the park as a retaliatory measure for being pushed out. Barbour Park wasn’t always a home to drug addicts. He said the park began to decline during the crack epidemic of the 1980s. Prior to that it was a spot for young people and neighborhood residents.

Rucker recalls playing at the park when he attended School 6. The school is steps away from the park.

“I appreciate the security he’s putting here,” said council president Ruby Cotton standing in front of the Fair Street entrance to the park. She represents the 4th Ward where the park is located. She said it sends a message to the drug users: “You can’t be in the park.”

As the councilwoman spoke, a man got out of a car, walked up to the side of the park, and began urinating. Rucker shouted at the man earning an apology.

“It takes time, but it tends to work,” said James Morrison, owner of Global Mark Security, of the community being able to reclaim the park from addicts using private security. A retired police officer from Newark, Morrison conducted gang and drug investigations.

Morrison suggested the idea is to get the message out to the users that this space is not a refuge for them. Another way to deliver that message is by having people actively use the park. Conspicuous security provides re-assurance to young people and other visitors that the park is a safe place.

Boxing trainer Rasul Muhamad was training one of his students on Thursday afternoon. He was not intimidated by the security presence and appeared to welcome it.

“Every day I’m in here cleaning the park,” said Muhamad.