Mayoral candidates showcase their ideas for the city | Paterson Times 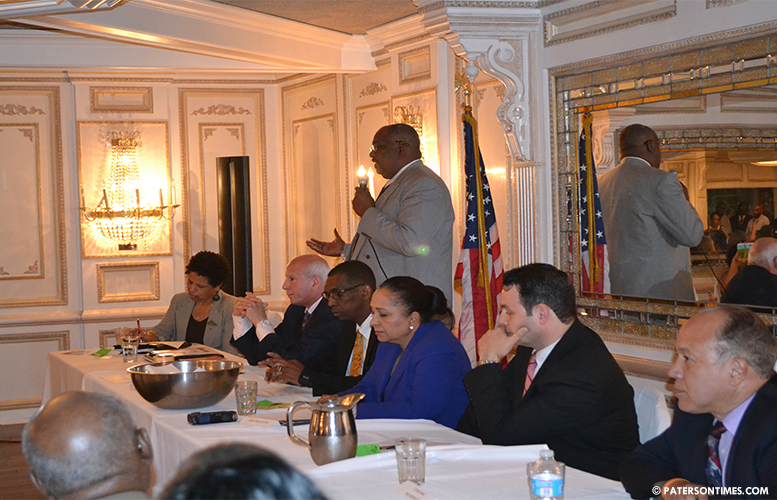 Picking questions out of a tin bowl at a Market Street restaurant, mayoral candidates answered questions on disparate topics raised by city residents, during a candidate forum Tuesday evening that was organized by the Eastside Neighborhood Association.

Candidates began with two-minute opening remarks that was quickly followed by the most pressing issue question of the moment: how the next mayor would address potholes.

“This administration we had dropped the ball,” began Aslon Goow, the former 2nd Ward councilman. “We have potholes from three years ago that have not been repaired.”

Jose “Joey” Torres, former two-term city mayor, said he wants to rebuild most of the city’s primary roads by matching a grant the city receives from the New Jersey Department of Transportation (NJDOT).

“I have already identified 170 primary roads, that’s almost one million linear foot of road work,” said Torres. “Those primary roads can be rebuilt by matching our road surface transportation money that we get from the state, we match that through bonding because it’s a capital improvement — spread out the payments over 15-years.”

In 2013, the city received an NJDOT grant of $563,650, according to state record. “If I gotta get a shovel and I gotta get a truck I will fill those potholes.” Goow said.

The forum, held inside the Bonfire Restaurant in the city’s 3rd Ward, followed an unique format, where after a candidate picked out a question from the hopper the following candidate had the option to either answer the already selected question or pick out a new question.

The next question quickly moved to public safety. Candidates were asked how the next mayor would employ Crime Prevention Through Environmental Design (CPTED). David Gilmore, city activist, said, “Lighting is very important. We need LED lights, high intensity lights in the neighborhoods, there’s too many streets that have no lights at all.”

“We have to get a hold of these vacant properties,” said Andre Sayegh, 6th Ward councilman. “Not only are they eyesores, but they become crime magnets as well.” Sayegh, the council president, said he would make sure the abandoned properties list would be readily accessible to developers and the public.

Through the 11 questions that were picked out of the bowl candidates made remarks sometimes on very different subjects while other times commenting on almost identical topics despite having picked out a new question.

“I’m going to incorporate neighborhood liaison people, 12 of them, two per ward,” said Donna Nelson-Ivy, director of the city’s health department. Nelson-Ivy said by having two per ward she can improve quality of life in all six wards.

“Crime fighting is pretty much like raising a child,” said Maria Teresa Feliciano, retired supervisor of the Passaic County Prosecutor’s Office’s criminal division. “We need the village, we need all the elements of society doing that.”

“A lot of our problems stem from drugs, people come very far across this country to Paterson for drugs. Our narcotics unit is at its barebones; we double the number of detectives, we get a hold of that drug problem,” Sayegh said.

A question asked how the next mayor plans to bring down property taxes to 2009 level prior to the two 29-percent increases under Jeffery Jones, the city’s current.

“We will be going through a revaluation, we went through one in 2006, it was a poorly executed revaluation, this one is designed to ensure all of our properties are assessed appropriately,” said Jones.

A new revaluation, which city officials said began in December, would bring city properties to their correct market values, thereby reducing taxes for most residents overburdened with the high tax levy.

Torres defended his 2006 revaluation. “In 2006, we were forced to do a re-val after 30 years. Court order, we did it. The market was high, then the market crashed, and then as a result of that all the assessed values were still high,” said the former mayor.

Torres was forced by surrounding municipalities after the city’s neighbors managed to obtain a court order forcing the city to go through a revaluation. Blaming the current administration and city council, Torres said, “They should have done the re-val in 2009.”

Although the city cannot return to the rate from five years ago, said Goow, “I think we can stabilize the taxes.”

“We need to simplify the process of doing business,” said Feliciano, who along with Nelson-Ivy pointed out that the city’s permitting process hinders businesses from coming into the city.

“We are not business friendly, folks,” said Nelson-Ivy pointing to the excessive amount of red tape.

Nelson-Ivy said sometimes it takes months for businesses to obtain a simple certificate of occupancy.

Torres pulled out a question about severance pay. The former mayor explained because he worked for some 25-years at the city his sick and vacation payout was legal and normal under city ordinances and policies.

“Anyone who works over 15-25 years is entitled to get paid for their sick and vacation days,” said Torres.

Gilmore quickly pounced on the former mayor saying sick and vacation days were not for executives and administrators.

“Just recently, we read about the former mayor who collected $74,000 on his way out of office — entirely inappropriate and unjustifiable,” said Sayegh. “There’s no reason for anyone in a struggling city with poor people paying high taxes to collect money on the way out of the door or for overtime.”

Sayegh tossed one sentence striking Torres for taking $74,000 during his last week of office and Jones for holding an overtime bonanza following Hurricane Irene when most department heads in the city received unjustified overtime checks based on a precedence set by Manuel Ojeda, former Department of Public Works director, who received overtime under Torres.

As it came turn for Jones to pull out a question from the hopper he was faced with, “Have you done something in the past that will make us feel comfortable to vote for you as mayor again?”

The mayor side stepped the question to answer a criticism tossed at him by Gilmore. The activist remarked that Jones hired his frat brothers and sisters. Jones, responded, “Ladies and gentlemen, you’ve been entertained a couple of time about hiring people because they were fraternity brothers and all that stuff that was never part of the consideration, the consideration was always finding highly skilled and highly qualified people.”

Nelson-Ivy, after pulling out a question about cleaning up city streets, said residents have to change their habits to maintain a clean city. “We need to educate, re-educate our people, our younger people, our young adults, you can’t just walk passed a trash can and drop the hotdog on the ground,” said Nelson-Ivy.

A large number of residents came out for the candidate forum. With the entire room overfilled with interested residents, Feliciano remarked, “This is the best attended forum so far.”

Rigo Rodriguez did not attend.